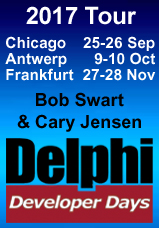 2017 Sept-Nov: Delphi Developer Days 2017 with Cary Jensen and Bob Swart
I'm back doing Delphi Developer Days this year, with a Special Edition Database Workshop. Cary Jensen has just announced the Delphi Developer Days 2017 Special Edition Database Workshop tour in the USA (Chicago, Sept 25-26), Europe (Frankfurt, Germany, Nov 28-29) and Scandinavia (Copenhagen, Denmark, Nov 24-25).
The workshop starts with a detailed look at connecting to data and configuring FireDAC, and continues with a look at some of FireDAC’s more advanced features, including Array DML, the SQL command preprocessor, and cached updates.
The workshop continues with an in-depth discussion of multi-tier development. Topics include creating DataSnap servers and using Embarcadero’s RAD Server. Here you will learn how to access your data from mobile applications, how to support both Delphi and non-Delphi clients using REST (REpresentational State Transfer), and how to create RAD Server microservices with Delphi.

2016/02/16 - Delphi 10 Seattle Update 1 VCL AppAnalytics Hotfix
This hotfix addresses an issue in connecting to the AppAnalytics server after applying Update 1. Updated on Feb 16, 2016 to address an issue when applying to Professional edition.

2015/12/04 - Delphi 10 Seattle Updates #1 Hotfixes
There were a few issues introduced with the Delphi 10 Seattle Update #1 that are now solved with two hot-fixes. The first one is specific for C++ CLANG for non-English editions of C++Builder and RAD Studio. The second one is a fix for a GDI resource leak in the Modern Themes package of the IDE.
Note that the fix is only available if you have an update subscription (without Update #1 you won't be affected by these issues anyway).

2015/09/30 - PAServer Hotfix for Delphi, C++Builder and RAD Studio 10 Seattle
Updates, hot fixes, and patches are provided exclusively to customers with an active Update Subscription, however, this particular critical patch is being provided to all 10 Seattle customers.
Delphi, C++Builder and RAD Studio 10 Seattle provides support for building OS X applications that run on OS X 10.10 (Yosemite) or 10.9 (Mavericks), plus support for building applications that run on iOS 9 using the iOS 9 SDK, or on iOS 7, 8 and iOS 9 using the iOS 8 SDK. This PAServer Hotfix provides fixes for:

2015/08/28 - VCL Premium Styles Pack for RAD Studio 10 Seattle
Customize the look of your VCL Windows applications with eight premium styles included in this style pack. Choose from the Coral, Diamond, Emerald, Sterling, Jet, Vapor, Copper and Radiant styles to change the look of your application.

2015/09/02 - Delphi 10 Seattle Released
Embarcadero has released Delphi, C++Builder and RAD Studio 10 Seattle in Professional and Enterprise editions (as well as Ultimate or Architect editions with additional Embarcadero database tools). See the Feature Matrix and the Release Notes for more details.
Developers from the Eurozone can order an Upgrade or New User license from my webshop.