2006/10/01 - VCL for CF.NET later in 2007
At the Opening Keynote of EKon 10 / BorCon Europe 2006 last week, Nick Hodges showed the Delphi Product Roadmap. Compared to previous versions of that roadmap, there was one item in the slide (not shown on the website at this time) that immediately got my attention. Although Delphi Highlander was depicted as shipping in the first quarter or first half of 2007, there was also an arrow somewhere in the second half of 2007 that said "VCL for CF". When I asked Nick directly if this meant that "VCL for CF" would not be in the initial release of Delphi Highlander, Nick had to admit that this was indeed the case.
For more details, see the complete article of the Delphi Highlander Preview.

2006 July - IDC and Borland DTG mobile application development survey
IDC, an independent world-wide market research company, is conducting a worldwide survey to get a developer's perspective on mobile application development in collaboration with several large IT vendors, including Borland’s Developer Tools Group (DTG).
The intent of this survey is to better understand the extent to which developers are developing and deploying software for mobile users and embedded devices, and developers' perspectives on some of the issues surrounding mobile appicatioin development.

2006/03/06 - Sneak Peek of Remote DataExplorer
John Kaster has published a screenshot of an Easy Compact Framework Connectivity prototype with some of the work Ramesh Theivendran and his team are doing right now. The screenshot shows a CF Remote DataExplorer treeview with BDP connections, showing at least InterBase and the Employee table in the DataGrid (the DataGrid is probably running locally, while the data is obtained remotely). 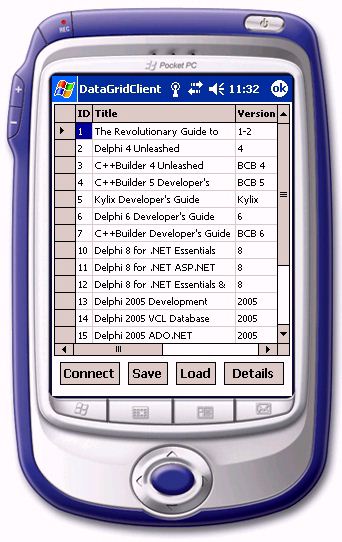 2006/01/09 - Compact Framework Apps in BDS 2006
In this BDNtv episode, Tim explains Microsoft .NET Compact Framework (CF) development with Delphi, and discusses the difference between CF and the full framework. This episode is intentionally bare bones, to provide the rudimentary steps of setting up and performing CF development with Borland Developer Studio 2006. Tim shows how to build a simple application and get it running on the Windows Mobile 5 emulator in the simplest way.

2005/05/21 - Delphi 2005 CF Technology Preview Command-Line Compiler
In his weblog, David I mentions a technology preview of Delphi support for the .NET Compact Framework. To design and implement the application, you first build it in Delphi 2005 as a Windows Forms .NET application. Then you have comment out a few property settings (in the form designer managed code section) for properties that are not implemented in CF. Then you can use the upcoming Delphi CF technology preview command line compiler to re-compile the application and download it to the PocketPC device.
Stay tuned for how registered Delphi 2005 customers can get their hands on the preview compiler.

2005/05/17 - New Delphi Survey
Borland is offering us the chance to vote for what we think is important in the next version(s) of Delphi in a new Delphi Survey. This is your chance to have your say, so go for it!

For me, the choice is clear: VCL is the way to go for GUI applications: VCL for Win, VCL for .NET and I'd be very pleased with a VCL for .NET/CF. With a little work you can produce almost single-source applications (with some IFDEFs) for Win32, Linux, .NET and in the future hopefully also Compact Framework...