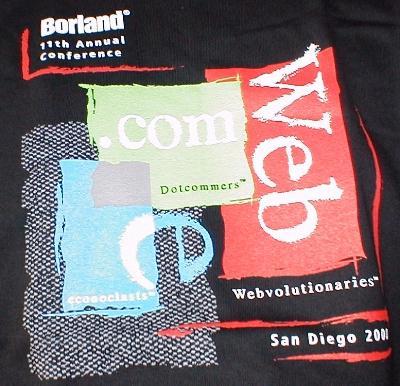 Like previous years, we've presented a "live" Conference Report on this website including details (and photos) of all major events, Inprise/Borland and third-party announcements and session details. Our focus has been especially on Kylix (Delphi for Linux), Delphi 6 and other new developments, so stay tuned...

Right before the BorCon began, we learned that Charlie Calvert will be leaving Borland, joining Cary Jensen to form a new training and consulting company. I'm sorry to see Charlie go, but at least he's not lost to the community. Good luck, Charlie, I hope we'll still be seeing and hearing lots of you in the future...

Sunday evening was the opening keynote by Dale Fuller and David I. While waiting for the keynote to start, each one of us was given a little bag of jelly beans - a blue pill and a red pill (remember the rabbit hole?).
And the big screen displayed a The Matrix screensaver (now available for download), so everyone was getting in the mood...

David I entered the stage, talking about The Matrix, talking about computing, new technologies, etc. Talking about taking the blue pill, going out the door, and you'd still be in San Diego (still writing Client/Server apps). Or taking the Red Pil, and exploring just how deep the rabbit hole goes...

Then Christine Ellis interrupted with a special express delivery package for David... it contained a cellphone. The phone rang (the audience cheered). 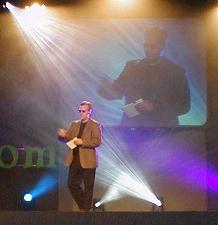 Dale Fuller entered the stage. He reminded us of the three promises he made to us last year; the three important rules (and he told us how Borland implemented these rules):

Dale also told us that the hardware war is over. The OS-war is over (some people are still fighting it, but it's over). The browser war is over. The Web is the answer. But not the static web, showing nice images but nothing more. No, Dale also took the Red Pil, and went on for a dynamic web. An interactive web. We'll all be webvolutionaries. And to do that, we need guns. Lots of guns (of course, another pun at The Matrix, which would trigger David I up to three times to run up the stage and show some small footage of The Matrix to illustrate the similarities and relevance of that great movie).
Dale mentioned a new product (or service?) called Blue Dwarf (in The Netherlands, that's called a Smurf, by the way). It wasn't very clear what Blue Dwarf is all about. Blue Dwarf would help you to avoid having to enter all your information more than one time (so it would store it someplace for you? Or would it re-enter this info for you automatically? Like a cookie?) My guess is that Blue Dwarf will be some kind of development tool/util that integrates with existing Borland tools and technology to help developers create applications that can easily manage information and avoid people having to use static old technology. Take the blue pill if you don't want to know what Blue Dwarf is (more about that later this week, I assume), but just want to remain in a world using flat-files, Client/Server, etc. Or take the red pill if you want to learn more about Blue Dwarf (and again see how deep the rabbit hole goes).

The above photo shows David I. and Dale looking at another scene - the "Whoa!" scene. This was about the time that Dale told about Delphi for Windows, and Delphi for Linux. Enabling us to write cross-platform solutions, using a single development tool.

Three demos were given, by three guest speakers.

After these three guest speakers, Dale returned and showed a new sticker: "Made in Borland" (with a very small text saying "An Inprise Company" below the Borland name). We could all come up to Dale and ask for a sticker (guess who got the first one ;-).

The final Q/A at the end included a question about InterBase 6. Dale told us that it was "the legal guys" that had caused the delay, and InterBase 6 should be released and Open Sourced within two weeks from now. In the meantime, a InterBase 6.0 Beta License Extension has been made available that lasts until August 1st, 2001. 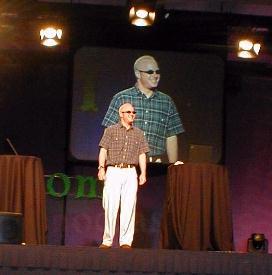 The Delphi Product Address started with Ben Riga, who asked what the following lines have in common: Politicians tell the truth. Hell Freezes over. And, of course... Visual Basic for Linux. The one thing these things have in common... is that they will probably never happen. And in light of that fact, Borland is now working on a new marketing campaign called "Visual Basic for Linux", applying to Visual Basic developers who want to produce cross-platform applications. Ben talked about market studies that showed that 33% of the VB developers are already using Linux in some way, and over half of the VB users would indeed (or probably) want to be able to develop for Linux (this was asked last year, so the numbers may be up at this time).
After Ben mentioned cross-platform, and how it's important to us developers. Not just hardware, but OS, GUI, Web, database, distributed and more. And that was the main idea (cross-platform) when they started the Kylix project. Ben introduced Michael Swindell, who told us all about Kylix. The three most important aspects of Kylix are:

To support Kylix and to enable cross-platform development, Borland has been working on CLX (pronounce "Clicks"). CLX consists of four parts: After talking about these for a while, Michael went on with the first live demo of an application written live in the Kylix IDE. He dropped a button, an editbox and a listbox (for the well-known "click on the button to put the edittext in the listbox" example). Unfortunately, after Michael double-clicked on the button, the Kylix IDE froze (I'm sure glad I wasn't in Michael's shoes at that time).
While recovering, Chuck came on stage to talk more about the CLX architecture. Chuck showed a Kylix app, running on Linux, and then the same source code creating a Windows application. Both could set their styles (Motif, Windows and even "wooden").
After Chuck was done, Michael came back and finished the example. This time it worked fine. He even got bold, and moved on to drop a TClientDataSet, TDataSource and TDBGrid component. There was no support for these at design-time, so he used code to set the properties, but it ran just fine, showing data (using LoadFromFile) inside the DBGrid.
More sessions on Kylix will follow during the conference, and we'll report on them in detail, of course!

After we dug up from the Kylix rabbit hole, it was time for Ben to tell us about Delphi 6 as well. He didn't actually show it, but did tell us that Eddie Churchill will be doing a Delphi 6 Technology Preview session, which is one session I wouldn't want to miss for the world, so stay tuned...

Monday, 2000/07/10 - Meet The Delphi Team
The last session on Monday was the annual "Meet The Delphi Team" session (which was just after the Meet The "other" Team sessions, like Meet The C++Builder Team or Meet The JBuilder Team). The Delphi Team was visited by a room full of people - over 1,000 people attended this session, and enjoyed themselves.
It all started with Ben Riga calling the names of all previous winners of the Spirit of Delphi Award (of which Marco Cantù and Bob Swart were the only ones present at BorCon in San Diego). Then the Spirit of Delphi 2000 winner was announced: Maxim Peresada of Torry's Delphi Pages - congratulations! Unfortunately, Maxim wasn't in San Diego either, so the "Spirit of Delphi" Chat on Tuesday morning was being hosted by Marco and I (facilitated by Christine Ellis).

Tuesday, 2000/07/11 - What's Cooking in the Borland R&D Lab?
On Tuesday, the Keynote was held by David Intersimone, Vice-President of Developer Relations at Borland. Again, three guest speakers appeared.
Blake Stone showed some cool demos of JBuilder on Mac OS X, and he also showed that Java doesn't have any performance problems with some performance benchmarks. He also showed the UI for an app persisted as XML. This makes it really easy to move a UI from tool to tool... You could even modify the XML for the UI and reimport it back into JBuilder. The JBuilder addon for (Palm) Handheld Express was very impressive to see as well.
Mike Rozlog showed AppCenter 4.0 autodiscovering the hierarchy of an AppServer and it was all nicely graphed up in a matter of minutes. He showed "hot swapping" or re-deployment of EJBs while clients were running. The coolest thing he showed was Delphi talking to EJB! Of course he showed clients in C++, Java, Delphi and on a WAP phone (Nokia emulator), all talking to the same AppServer.
Next up were Ben Riga and Simon Thornhill to show what's cooking in the Delphi/BCB/Kylix labs. They demoed XML, DTD, XDR, and some other stuff. Ben demoed publishing of data as XML using "TXMLTransformClient". He also showed insertion of a record (in XML) into a dataset, as well as transforming a complete XML document into a dataset from scratch using "TXMLTransformProvider". XML to XDR mapping was shown. Cross platform Linux and Windows is the message. "We'll wrap the DOM for you - both Microsoft and IBM." Simon's last slide said "Simplify application intergration and B2B e-commerce". You'll be able to do it all in Delphi.
Finally, in the "beyond the next release" section, Ben showed what we're looking at in the future. He started by showing a slide "Forward looking statements..." The best part was all the way at the end "...if you read this far you're probably lawyer material".
Ben also had a slide that said "The web as a platform", and it mentioned:

It's gonna be an interesting future for Delphi, that's for sure...

Wednesday, 2000/07/12 - Closing Session
For the first time in eight years (I've been a BorCon visitor since 1993, and regular speaker since 1994), I've been able to attend the closing session.
Anders Ohlsson showed

Dr.Bob's Sessions
I've done two sessions myself: one on Delphi (Distributed) Efficiency (a topic that I've been doing since 1994) and one on Advanced WebBroker Techniques, a topic that I've written about in Delphi 4 Unleashed, C++Builder 4 Unleashed and C++Builder 5 Developer's Guide. In addition, I've started with a Birds-of-a-Feather Session during lunch on Tuesday, on Active Server Object and WebBroker.
You can download a preview of my slides, including BobSlide (the slideshow application - written in Delphi of course). Source code examples for the birds-of-a-feather, WebBroker and Efficiency sessions is available now for download.