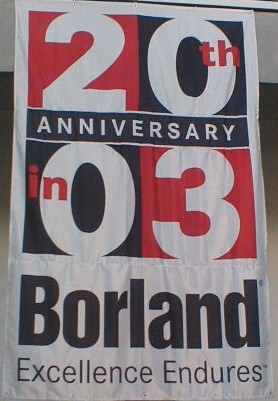 Like previous years, I will write a "live" Conference Report on this website including details (and photos - when I'm back on thursday) of all major events, Borland and 3rd-party announcements and session details.
My personal focus will be on Delphi (for .NET) and C#Builder, but I also look for any news on C++Builder (6 and X), Kylix, and JBuilder X (it was only 7 at last BorCon and now version X already!) as well as other new developments.

Conference attendees were given the opportunity to purchase Borland products with roughly a 50% discount, and software assurance at the same time (which gives you the right to free upgrades/updates within 12 months). That's a very good deal, and probably has provided for an ROI on BorCon for a lot of people already (even apart from the knowledge and insight gained from the numerous sessions).

This year, I was selected to give a pre-conference tutorial as well as regular sessions, so I arrived on Friday evening. The world was spinning a bit (it always is, but this time I felt painfully aware of that fact), so I turned in early (or late, depending on your biological clock). 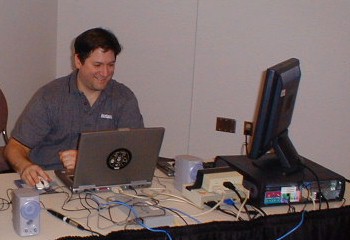 Today I attended a number of pre-conference tutorials, like John Kaster's afternoon session about C#Builder (see picture). I've heard mixed feelings about C#Builder - some people like it, others dislike it, but I have to say I really love to work with it (although I do need to work at a higher resolution than I used to).
I also took the time to meet with some people and enjoy the computer lab (for the first update of this report). It's amazing how fast the connection speed was! And from the growing number of laptops (it's so much nicer to read your e-mail on your own machine), I imagine next year Borland only has to provide the connection, hubs and cables (or even skip the cables and offer wireless connections to everyone), since it sure looked like a 50:50 distribution between (hired) desktops and laptops. I remember a few years ago when there were only one or two laptop connections available!

Sunday, November 2nd
The second day with pre-conference tutorials is now over. During my morning pre-conference tutorial about BizSnap: XML & SOAP, I could actually use Delphi for .NET to consume and connect to a Delphi 7 Web Service (which worked perfectly, and illustrates one way to connect the Win32 world to the .NET world).
Danny Thorpe's afternoon pre-conference tutorial about Using Delphi for Microsoft .NET Framework Development was packed - there was no more room, and some people were standing at the back of the room just to get a glimpse. Well, Danny used Delphi for .NET, but mainly used slides to explain what he had implemented (and what not) of the Delphi language features and enhancements that he told us last year were needed to make Delphi a real .NET citizen. It was amazing to see that just about everything - and even more than that - has been implemented, and some of the very impressive highlights include operating overloading (really!), class helpers and unmanaged exports (where a .NET assembly can be used and called by a Win32 executable - without COM interop, just like that).

The Opening Keynote (also on Sunday, so it felt like a long day already) was fun. 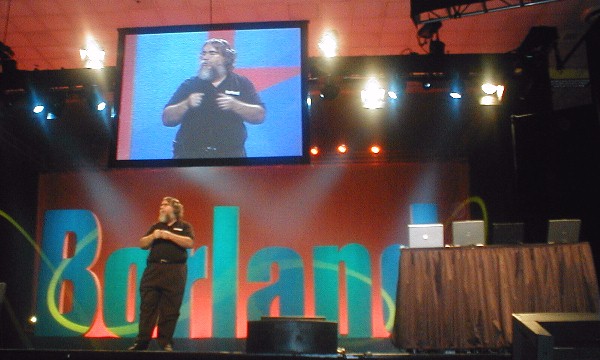 David I started with giving some images from Borland's past (it's the 20th anniversary), and then called CEO Dale Fuller as well as CTO Blake Stone onto stage, where they showed a tiny bit of CaliberRM, JBuilderX, C#Builder and I guess also C++BuilderX (it was a bit too brief to know for sure).
We did not get any announcements of new products at this time - those were left for the general sessions (a new phenomenon of BorCon - each morning started with a general session by Borland). The Opening Keynote ended with the usual awards (partner of the year, trainer of the year, etc.) and the Presidents' Award, which this year went to Rick Nadler for this efforts and contribution to SOAP and Web Services. Congratulations, Rick! 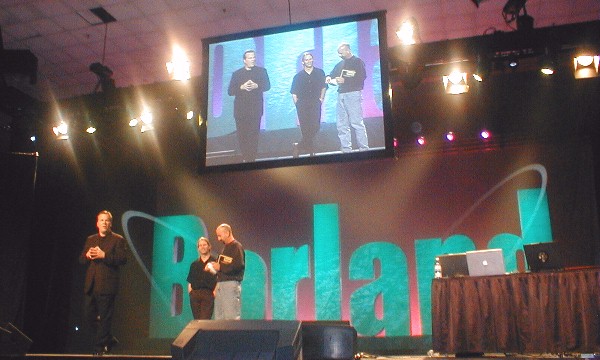 Tomorrow (monday) will bring some more news from the .NET Group (the new name for the RAD Group, which is actually responsible for .NET, Win32 and Linux stuff - not just .NET). The 8 am session will most likely feature a full demonstration of Delphi for .NET, and monday evening - after the Meet the .NET Team - there will be a special Delphi 8 for the Microsoft .NET Framework Launch Event.

Monday, November 3rd
The general session (something they're doing for the first time this year - starting the day with a general session) was far more interesting than the Opening Keynote, and really made my day. It contained two new product announcements: Delphi 8 for the Microsoft .NET Framework and Borland Enterprise Server for java 7. See the new

The Industry Keynote today was by Microsoft, showing Longhorn as well as giving details on lots of codenames such as Yukon, Avalon, WinFS, Whidbey, WinFX etc. made it clear that Microsoft is seriously working on .NET, and what we have at this time - .NET 1.1 - is still only the beginning. And if you're not currently looking at least a bit at .NET, you may wake up one day and find that the (computing) world has moved on. Fortunately, with Whidbey (version 1.2 of .NET I believe), the later transition to Longhorn and WinFX (which is short for the Windows Framework) will be easier than it is today. It will also mean additional effort from Borland, since Delphi for .NET must be made aware (or compatible, whatever way you look at it) with Whidbey as well as - in the long run - WinFX. But with the current friendliness between Borland and Microsoft, I do not expect a problem here. It was really funny to see Microsoft semi-proudly mentioning Delphi 8 for .NET as new addition to all the .NET languages that are available today ;-)

At the Meet the Team session, we were introduced to the .NET Team (responsible for .NET, Windows and Linux products like Delphi, Delphi for .NET, C#Builder and Kylix).
Below you can see Eddie Churchill, trying to explain what he does at Borland ("I do... stuff"), and what an embarrassing moment would be for him (like Variants in D6). Also from his comments, you don't ever want to get in the car if Eddie's driving (Danny, Allen and Chuck are no longer allowed to go to lunch together if Eddie drives ;-) 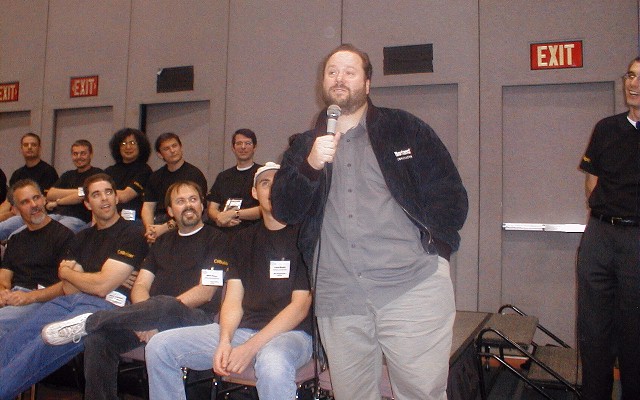 Before we got the chance to ask questions, Simon Thornhill answered two questions that were asked a lot. Yes, there will be an update for Delphi for Win32, and this is still alive and well. And No, they do not know when they will have an update for Kylix - at least not in 2004, at least that doesn't mean it will never happen (but not anytime soon, that's for sure).
Interesting to read, in that context, is the third page of the interview with CEO Dale Fuller and CTO Blake Stone by Tim Anderson which was give right after BorCon. 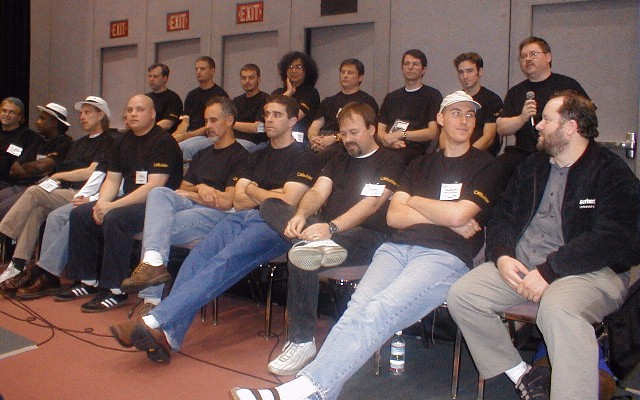 And the end of the session, I felt sure that people who are currently more interested (and committed) to Win32 than in .NET can safely go to sleep, knowing that Borland has not forgotten about Delphi for Win32, and will be coming with updates (although I have no details in which form or when, yet).
Talking about Sweet Dreams: after the Meet the Team session, it was time for the Delphi 8 for the Microsoft .NET Framework launch party, which had a great cake (did anyone dare to cut it?), cookies, ice-cream and lots of other sweets. A lovely way to end a long day, but not without having pictures taken with some great people that I met there, like Joe Mayo (author of C# Unleashed and C#Builder Kick Start), Corbin Dunn, and Allen Bauer. 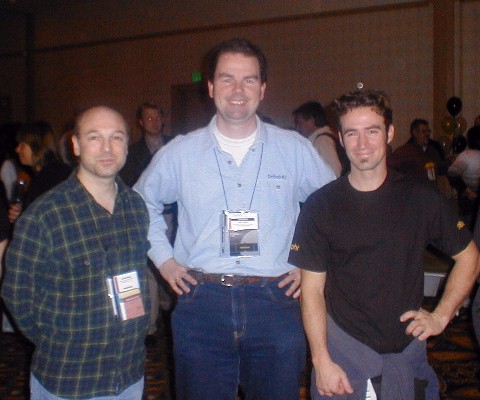 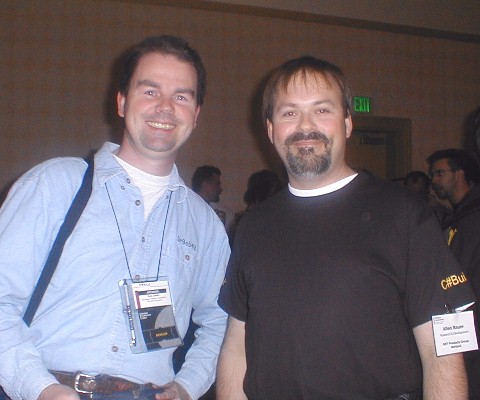 Tuesday, November 4th
Today started with my own birds-of-a-feather session (at 7 am) about RemObjects SDK, which had about 42 people in the room (amazing: is that a record for a BOF-session?).
Apart from the normal sessions that I attended, there were also the poster sessions - another new and innovative thing this year. The concept and idea is really nice - have a poster placed (containing a short coverage of a particular topic or problem), with the author nearby to discuss or answer questions. It was a bit strange at first to see the posters in the middle of the exhibition area ("come look, we are not trying to sell you something"), but this is something to repeat in the future for topics that are too short or narrow-focussed perhaps to be done in an entire session.

My own session introducing TClientDataSet and (moving from BDE to) dbExpress went well, and had a lot of people in the room. It was made clear at the Meet the Team the day before that the BDE is "only" frozen, but light-frozen at that, since it's still available to connect to from Delphi for .NET. SQL Links is the part of the Borland Database Engine that's deprecated and should be replaced by something else in your applications - like dbExpress (or the Borland Data Providers if you've moving to .NET).

The Tech Museum on Tuesday evening was very interesting and fun. We had some nice food, great stuff to play with, and a 10% discount on all stuff in the store (so my kids can expect some nice new toys when I get home ;-)
I'm afraid I forgot about the time in the tech Museum, so I missed the Meet the C++/Mobile session. Fortunately, Paul Gustavson attended that session, and send me some notes to use here (see also the picture below where we hold a copy of the C++Builder 6 Developer's Guide that we signed at BorCon). 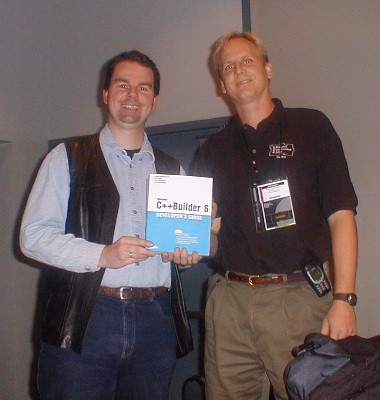 According to Paul, the following happened in the Meet the C++/Mobile Team session (which was also posted to the Borland newsgroups):

Following introductions of the C++ team, JP Leblanc took careful time in sharing what he could not in the infamous "open letter". He provided a little bit of background of how the story unfolded and what their strategies are (Strategies 1 and 2 --- now potentially 3 if they pursue backward compatibility for VCL in their designer).
JP shared the Borland the two key strategies for C++BuilderX. To summarize...

I was told that several key Borland guys left the event afterwards with great appreciation of what the community shared commenting to each other "this was good... this was good" as they reflected on the evening. The point being is that the community's voice was heard and Borland was and is intent in listening (and they want to find a way to satisfy their customers while maintaining the vision they have for the product). In fact, even though BorCon is over, they still want to hear from us at

Other notes, they are working hard with the WxWindows guys to make the necessary changes for full Visual RAD support and have formed a brand new organization called wxsf org.

Thanks again to Paul Gustavson for sharing his notes and insights!

Wednesday, November 5th
Of all the Borland Conferences I attended, I was only able to see the closing session one time (in San Diego, 2000) because my plane would leave on Wednesday already. This time, my plane left early in the morning (I had to transfer at Chicago), so I missed all the sessions on Wednesday.
Usually, the Closing Session is the place where they announce the date and location of next year's Borland Conference, but from what I understand, Dale Fuller mentioned a few cities but never really announced where (or when) BorCon 2004 will take place. As soon as I find out, I'll let you know, of course (you can always check my events page for updates).