Delphi 2007
Back in February of this year, CodeGear announced Delphi 2007 for Win32. The name specifically mentioning Win32, holding the implicit promise for more/other Delphi 2007 editions to come (like a Delphi 2007 for C++ as well as a Delphi 2007 for .NET 2.0 - both to be expected later this year).
During the closing session at end of CodeRage - the first "virtual" online conference organised by CodeGear - on March 19th, the immediate availability of Delphi 2007 for Win32 was announced. Customers could purchase it and either wait for the DVD or download a small setup.exe to install it immediately.
Of course, the number "7" has for many people a special meaning (often even more special than 42, although that number has a deeping meaning). I still have fond memories of Turbo and Borland Pascal version 7, and Delphi 7 doesn't get the chance to collect a lot of magnetic dust on my machine. In fact, Delphi 7 appears to be among the most popular versions of Delphi being used today (for Win32 development, that is). Delphi 2007 for Win32 is supposed to "seduce" the Delphi 7 developers to stepping up to the latest edition.

Installation
During the installation of Delphi 2007 for Win32 (the first personality of the CodeGear RAD Studio), you may wonder why the .NET Framework version 2.0 is needed. This is of course due to the fact that the CodeGear RAD Studio itself needs .NET 2.0. Not to produce .NET code, but for the IDE itself (which regards the .NET Framework apart from a development framework also as a useful library to use). 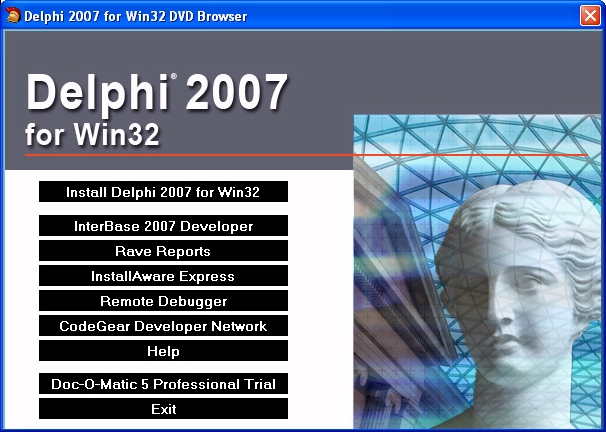 The installation process - handled by the InstallAware Wizard - checks all prerequisites which are either taken from DVD or downloaded from the internet when needed. The DVD contains almost the full available 4 GB of data - all different editions as well as languages of Delphi 2007 for Win32 are present on it (based on the Product License Key, the right version will be installed).
And apart from all Delphi 2007 for Win32 versions and editions (plus their prerequisites), the DVD also contains InterBase 2007 Developer edition, Rave Reports, the InstallAware Express version, the Remote Debugger, as well as a copy of the CodeGear Developer Network and finally a trial version of Doc-O-Matic Professional.

Windows Vista Support
One of the big selling points of Delphi 2007 for Win32 is not the fact that it's for Win32, but mainly that it contains support for Windows Vista - for Win32 applications.
The Windows Vista support can be found in a number of explicit places, more notably the Vista Dialogs components TFileOpenDialog, TFileSaveDialog and TTaskDialog. These three components in the Vista Dialogs category represent three new Windows Vista dialogs. However, unless you know on beforehand that your client application will run exclusively on Windows Vista, I would recommend against using them. At least the former two. The reason is that these three new dialogs actually use the dialogs within Windows Vista, and will fail with an EPlatformVersionException when you run your application on another version of Windows:

Instead of using the explicit Windows Vista editions TFileOpenDialog and TFileSaveDialog (which can result in the exception when not run on Windows Vista), we can also use the original TOpenDialog and TSaveDialog, and set the UseLatestCommonDialogs global variable (found in the Dialogs unit) to True. This will also enforce that the latest common dialogs are used, resulting in the Windows Vista open and save file dialogs when running on Windows Vista, but the "normal" open and save dialogs when running on previous editions of Windows. The best of both worlds, and even better since you do not even have to explicitly set UseLatestCommonDialogs to True (it's set to True by default). You only have to recompile your existing application with Delphi 2007 for Win32 to enable the Windows Vista file open and file save dialogs!
Apart from the three new Windows Vista specific dialogs, a number of Windows Vista specific support classes are also available in Delphi 2007 now, including (according to the list in the online help): TCustomFileDialog, TCustomFileOpenDialog, TCustomFileSaveDialog, TCustomTaskDialog, TFavoriteLinkItem, TFavoriteLinkItems, TFavoriteLinkItemsEnumerator, TFileTypeItem, TFileTypeItems, TTaskDialogBaseButtonItem, TTaskDialogButtonItem, TTaskDialogButtons, TTaskDialogButtonsEnumerator, TTaskDialogProgressBar, and TTaskDialogRadioButtonItem.

Glass Frame
Another Vista specific new feature in Delphi 2007 has been added to the TForm, which now has a GlassFrame property in the Visual Category. This GlassFrame property controls the behaviour of the titlebar of the application, and optionally all the way down to cover the entire form. This time, in order to enable the effect, you need to set the Enabled subproperty of the GlassFrame property to True (unlike the UseLatestCommonDialogs, the GlassFrame is not enabled by default). With the GlassFrame.Enabled set to True, the titlebar will show the glass effect when running on Windows VIsta with Aero enabled as well (this of course depends on your configuration of Windows Vista - for one of my machines I'm stil waiting for an updated Radeon 9250 driver for Windows VIsta in order to be able to use Aero).
Apart from the Enabled subproperty, the GlassFrame proeprty includes some additional properties for extra effect. You can set the Bottom, Left, Right and Top property to specify which borders of the Form will be turned into glass as well. This can give an extra nice effect (again, only on Windows Vista with Aero enabled). When designing the Form, the effect can be previewed using blue diagonal lines, as can be seen in the screenshot below (which also shows the GlassFrame property in the Object Inspector). The following screenshot shows the effect of my GlassFrame settings with the Enabled property set to True, the Left to 125 and the Top to 25 pixels. 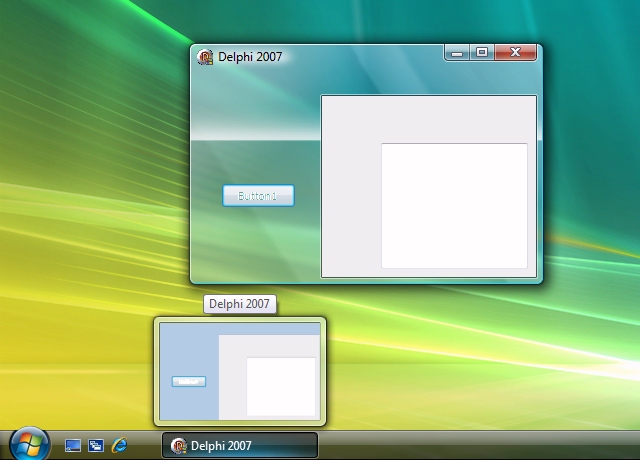 Note that you can also turn the entire Form into glass by setting the SheetOfGlass property to True. Although nice, I must say that I've found no practical application for that particular option so far.
Although the GlassFrame only works on Windows Vista with Aero enabled, there has been an (almost) similar feature in Delphi 7 supported by the AlphaBlend and AlphaBlendValue properties. By setting AlphaBlend to True, we can control the "opaqueness" of the Form with the AlphaBlendValue going from 0 (completely invisible) to 255 (totally visible). I've been using the AlphaBlendValue to have special forms like the About box or splash screen fade in and out. But apart from that, it's not much more than a cosmetic gimmick, if you ask me.
One other notable enhancement found in Delphi 2007 compared to previous versions of Delphi is that (XP) Theme support is now built-in from the start, meaning that you no longer have to add the explicit XPManifest component on a form (which in itself was not needed, but was only used to add the {$R WindowsXP.res} resources to your executable). All applications compiled with Delphi 2007 will have theme support enabled from the start. If you want to disable the themse for your application, you need to uncheck the "Enable runtime themes" checkbox in the Application page of the Project Options. This will affect the project's .res file, as well as the executable itself after the next recompile.
If you want to control the behaviour without recompiling your applciation, you first need to uncheck the "Enable runtime themes" option, and then you can use the presence of a .exe.manifest file next to your .exe with the following contents:

When present, this manifest will ensure that the corresponding .exe will be using themes. Without the manifest file present, the executable will not use themes. If you already have a .exe.manifest file, then just make sure the specific entry is present or not depending on your theme wishes.
The same technique can be used to disable themes for the Delphi 2007 for Win32 IDE itself. For this, you need to edit the bds.exe.manifest file in the C:\Program Files\CodeGear\RAD Studio\5.0\Bin directory. By default, the